G’day and welcome back to another episode of “Ask Ben.” Thanks so much for all the positive comments and feedback. This week on “Ask Ben,” I’m gonna answer two questions. One of them about tripods and one’s about destinations in Tasmania.

What Tripod to get?

It always amazes me as to how much people will spend on a lens, camera or even a camera bag but won’t splurge on a Tripod, when in reality, if you want tack sharp images a sturdy tripod is the easiest way. I myself have gone through a few tripods myself on the quest to find the perfect one. I don’t think there is ‘ONE’ Tripod that will do everything, so I actually have a couple of main tripods.

My Main tripod is the Really Right Stuff TVC-33, you can read my thoughts on it HERE. I have owned this tripod for a couple of years now and love it, it is just a bit big if you’re travelling and thats why I now also have a Benro Travel Flat carbon fibre tripod  – It is a lot lighter and easier to pack into my luggage, and it is still pretty sturdy. I am currently using the BH2 Ball Head from Benro but to be honest, I am not real happy with it and will probably swap it for something a little better. I will let you know when that happens.

Catherine Williams asked me if I could let her know what I thought would be a good tripod and in the video I explain what my tips are for choosing the right tripod.

I’m going to start of with Catherine Williams’ question.

“Can you name a good brand of tripod that you would recommend please? I would love to know that it has a lever on it and can leave the foot on the camera at any time. Thanks Ben.” 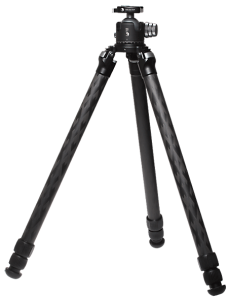 So if you’re buying a tripod for the long haul, I would say spend a bit of money on it. I’ve seen people spending thousands of dollars – I mean, you look at the 70-200 VRii, it’s a $2500 lens, and people would buy this lens because they want sharp photos. And then they would go and they’d use a cheap tripod, that’s going to vibrate and not give them the sharp images. Which to me just seems really, really stupid. So, if you’re gonna spend a heap of money on your camera and on your lenses, invest in a great tripod. Now, I’m not saying, go and buy a Really Right Stuff, you don’t need to spend $1500 on your tripod and head – there are other alternatives. 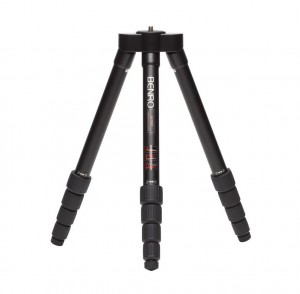 One of the most recent tripods that I’ve bought for travelling – which I thought was really good is the – is a Benro, they call it a travel flat. I’m not sure of the model number, but I’ll do a review on it at some stage. But if you CLICK HERE I will take you to their travel flat series. I got a carbon fiber one, and I’ve got say I was very, very impressed with the quality and with the sturdiness of it. And that’s what I look for in a tripod.

So, if you’re looking for a good tripod, they’re a couple of brands that I’d look at. Of course you’ve got your stables, you’ve got your Manfrotto’s. Manfrotto make some great tripods and are going be a little bit more affordable, and you’ll find something there. But once again, just go into the shop, have a look, take your camera with you, stick it on and try it out.

Now, all of these different manufacturers you can buy plates that will stay on your camera. So you said one of the things you want is to be able to leave the plate on the bottom. You’ve put “leave the foot on it,” but that’s what you meant, it’s called a plate. And all of these different manufacturers make it so you can leave the plate on the bottom of your camera, which is a very, very handy thing. So, good on you for deciding to go and get yourself a decent tripod. Hopefully that has helped answer that question.

I really enjoyed Tasmania and think it is a must visit for any keen photographer. The landscape is very different to what I have seen in other parts of Australia and there is many unique locations you can visit to photograph everything from waterfalls, seascapes, mountains, lakes and wildlife plus so much more!

If you’re thinking of heading to Tasmania and you love Photography I suggest you get in contact with my friend Luke O’Brien, he is a local in Tasmania and runs a lot of Tasmanian Photography Workshops and Tours.

My second question is from Damien Park.

“Just wondering if you could advise where in Tasmania I should go and photograph as I will be there for five days soon.”

Great question Damien, and luckily I’ve been to Tasmania a couple of times, and there’s some fantastic locations. And the other good thing about Tasmania is you can actually visit a fair bit in a short space of time. In five days, you are going be a little bit limited, it depends how much driving you want to do. And I’m not sure whether you’re going to Launceston or into Hobart. I’ll give you some of the locations and you can sort of jump onto Google Maps and see where they are and what’s going to suit you best. 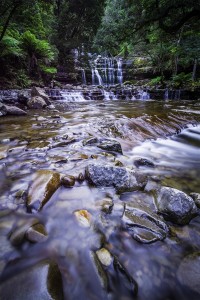 Cradle Mountain National Park, which is where the famous Dove Lake in Cradle Mountain is. If you can get there, I’d suggest it. Five days is actually not a long time to be in Tasmania, and be able to capture everything – especially if you go somewhere like there, because you’ll find quite often that early in the mornings, the peak of Cradle Mountain is hard to see, and you may miss the peak due to the cloud etc. But I would suggest, go to Cradle Mountain for a couple of days. The rainforest around there is amazing, and I think you would really enjoy it. Go to the national park in the morning, photograph Dove lake – same with the sunset. And then during the day, the good thing about being in that national park is there’s lots of rainforest reserves around where you can go into the rainforest and grab your macro lens, and go and get fungi shots and a lot of macro shots.

Another place that I absolutely loved was Mount Field National Park, which is sort of closer to Hobart, on the other side of Tasmania. At Mount Field National Park you have Russell Falls and you have Horseshoe Falls. And the same thing – during the day it’s rainforest, you can go crazy getting the fungi, which is really nice. And of course, you can walk right up to the top of the mountains there, it’s about a two hour trek. I went up to the very top, trying to get the Fagus when it was in bloom, but the weather was blizzardy, and it was windy and it was crazy. It’s called the Tarn Shelf, get yourself walking all the way up there, and it’s absolutely beautiful – magnificent place.

And then of course you’ve got the coast, there’s a lot of coastline in Tasmania, and I’ve got to be honest, I haven’t done it all. But I’m gonna give you a reference to a photographer that lives down there, that I met when I was down there. His name’s Luke O’Brien, and he runs his own web page. Feel free to contact him as well because he runs workshops down there, and maybe you can jump into one of his workshops.

So there you go, hopefully Catherine and Damien, that’s helped answer your questions. If any of you – if you have a question that you would like me to answer on the “Ask Ben” show, you can ask me by going to Twitter @on3legs #AskBen – so at on3legs with the number 3, #AskBen. And I will do my best to answer that question for you. Of course you can also hit me up on the Facebook page, even in the YouTube comments. I don’t care how you get to me, just ask me a question and I’ll do my best to answer it. Until next episode, happy snapping.