In 3 weeks Google will be holding the second worldwide g+ Photowalk, this is a chance to get out and about with other photographers, not just in your local area, but on a world wide scale, take pictures and then share them on Google Plus for the rest of the world to see!

I attended the first Google Plus Worldwide Photowalk last year, It was hosted by Michael Sutton. He is a prominent and accomplished photographer from Cronulla, well known for the fact he takes and processes most of his shots on his iPhone. You can find Michael on Google Plus and if you’re not following him I suggest you do!

Michael did a fantastic job of hosting last years photowalk and will be a hard act to follow! This year I am hosting the 2nd Anniversary Photowalk with Rob Potter from Photography Hot Spots and we’re honoured to have Michael Sutton attending as our special guest photographer. Besides photography, Michael is an all round nice guy and I am sure you will enjoy hanging around with him during the walk!

I went into Vivid last night and I was at the Grand Piano setting up my shot so I had the Opera house in the background and the reflection of the piano keys in the lid when a string of several people that could play and sing decided to put on an impromptu performance! If anyone knows who this guy is, let him know he can have the photo if he likes… he was entertaining. 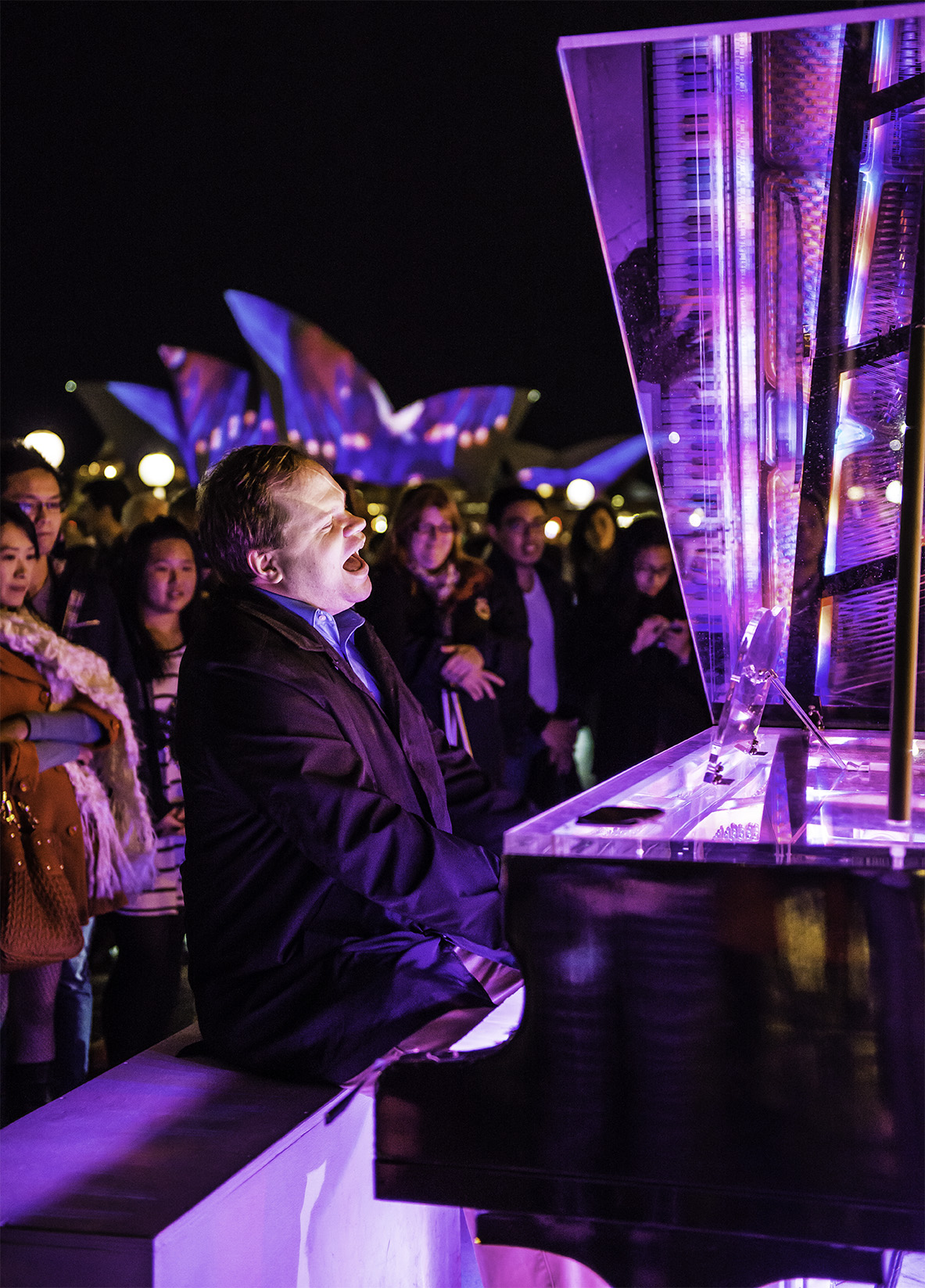 [tabbed tabs=”Camera|Mode|ISO|Aperture|Shutter|Lens|Filter|Other info”] [tab] I used my trusty D800 for this one [/tab] [tab] I used full Manual Mode, I find myself using Manual more often at night, I can control the exposure better [/tab] [tab] ISO2500 – I always shoot as low as possible but in a situation where I am using ambient light and I want a sharp image, I have to increase the ISO so I can achieve a faster shutter speed [/tab] [tab] f2.8- This is the maximum aperture for this lens, I needed to let as much light in as possible, plus, it reduces the depth of field to isolate the Piano Player from the background [/tab] [tab] 1/40 of a second – just quick enough to freeze the action [/tab] [tab] Nikon 24-70mm lens [/tab] [tab] No Filter [/tab] [tab] I got asked a lot about how I achieved this image without a flash and minimal noise. The D800 handles ISO2500 really well, and I will tend to under expose in these situations rather than expose properly with a higher ISO, I then tweak the exposure in post production. I spent about 30 seconds in lightroom to make this image pop, I was in a rush so noise reduction was done globally using lightroom… a bit lazy I know but it worked out in the end!  [/tab] [/tabbed]