I have heard all sorts of stories about people having their camera gear stolen, stories that give me shivers up my spine.

I remember hearing of a photographer falling asleep on a train, he was in a foreign country, you know, travelling around and he was pretty tired. He wanted to have a quick sleep during his train trip, but was worried about his camera bag being stolen, he wrapped the shoulder strap of his camera bag around his leg hoping this would wake him if someone tried to steal it. When he woke, the bag was gone! And of course, all of his camera gear was stolen. All that was left was the strap, they had used something to cut through the strap at each end, and the rest was all theirs. Losing his camera gear wasn’t the worst of it, he had been out all day on the trip of a lifetime, getting images he had dreamt about for months as he saved to go on this ‘once in a lifetime’ trip.

He had backed up his images too, but the hard drive was in the bag that was stolen, they got that too!

This is just one of many stories I have heard, some camera gear is stolen from peoples homes or cars, I have even heard of a wedding photographer losing his camera gear whilst shooting a wedding ceremony!

Lenstag will help you Locate your Stolen Camera Gear 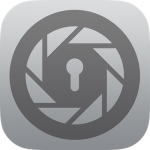 Over a year ago now, I came across Lenstag, I can’t remember how, or why. As soon as I worked out what it was for and how it worked, I decided to register and create my own Lenstag account. I started to list all my gear and enter all the values, and then a question popped up in my head. Who am I giving all this information too? Maybe this is a way for someone to find out what I have so they can come and steal my camera gear? I actually deleted the whole list of camera gear with this fear lodged in my head (I am only human after all)

The last thing I want to do is buy stolen camera gear!

Back in May of this year, after dealing with a shady character with a deal too good to be true, I decided to check out Lenstag again, this time, I wanted to see if I could use Lenstag as a way to check a serial number on second hand camera gear to make sure it wasn’t stolen before I bought it. I am an eBay and Gumtree addict, and sometimes even I am a little sceptical if the deal is just too good to be true, the last thing I want to do is buy stolen camera gear!

At this same time I decided to register my Nikon D800 and get it verified on Lenstag, this process was pretty simple, the hardest part is taking and uploading a photo of the serial number, not a big challenge for even the newest photographer. Since then, I have watched each month as Lenstag scours the web and finds my images, and at the end of the month sends me a report outlining what images it found and on what sites. Lenstag somehow checks the exif info of all the photos on the web, and if it matches your serial number on one of these photos, it lets you know! Pretty cool huh!

Anyway, last month, I read another story of a photographer that had their camera gear stolen, this time though, there was a much happier end to the story, this photographer had their stolen camera gear recovered, all thanks to the services of Lenstag. Best of all, Lenstag is FREE!

As you can see, I am well over my fear of Lenstag being a shoddy site trying to gather information about camera gear in some elaborate plan to steal it all! In fact, I am recommending you join the movement of photographers registering their gear, and together, we can reduce camera gear theft.

I decided that I wanted to share with you, as much as I could about Lenstag, and how you can register your gear to help you locate it, should it ever get stolen. Rather than me try and tell you how good Lenstag is, or try and explain the features etc. I decided to get in contact with Lenstag founder, Trevor Sehrer, who has devoted a huge amount of his own time and money to developing Lenstag and see if he would be open to an interview, to which he kindly said yes! 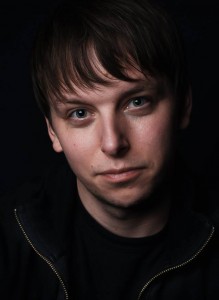 Trevor Sehrer has over a decade of experience in security and systems engineering. He got his start copying programs out of the back of 3-2-1 Contact magazine at the age of 9 and basically gave up on school around the same time due to his parents’ divorce. Trevor is currently employed by a technology company and works on Lenstag during his evenings, weekends, and vacations. Opinions are his own and not the views of his employer.

Lenstag is a free, collaborative project involving tens of thousands of photographers in nearly every country working to solve the problem of gear theft (and to a lesser extent image theft). The project itself is comprised of Lenstag — an app available on iOS, Android and the web — as well as a Google Chrome extension called Lenstag Rescue that tracks down stolen images and images taken with stolen cameras. And, finally, most important of all, the tens of thousands of photographers that use Lenstag and enable it to be as successful as it’s been. 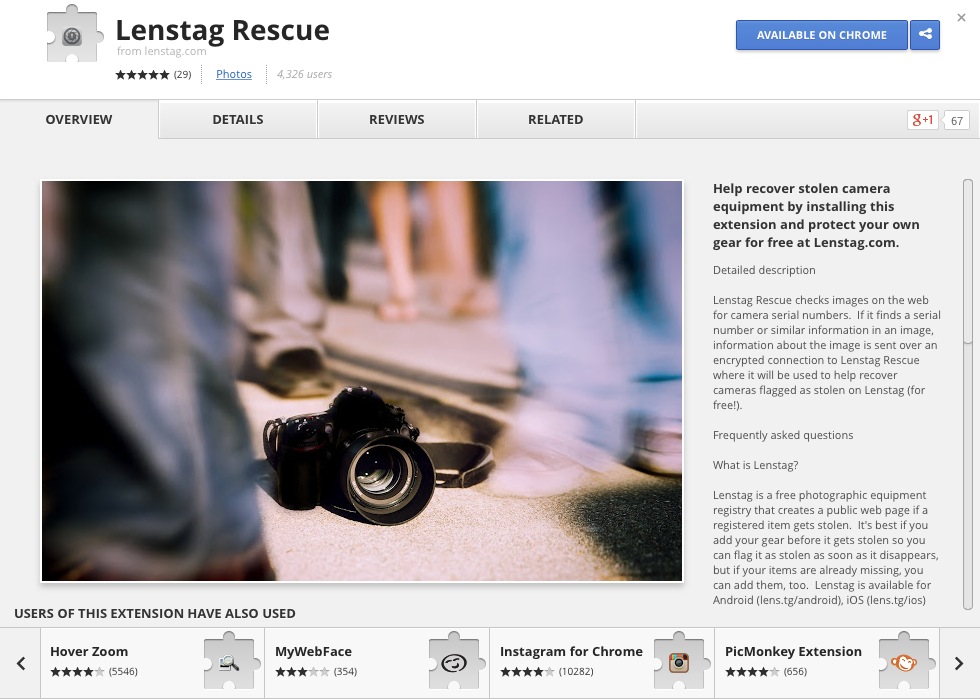 Why did you decide to start Lenstag?

To solve the problem of photo equipment theft by making it impossible to resell stolen gear as well as to find pictures taken by stolen cameras online in order recover them (which we’ve already been successful at doing). The framework for Lenstag grew out of a prior, unlaunched project that was a response to having a locked bike stolen from a 2nd floor apartment balcony that was facing 100+ other units in the complex on a Sunday morning at 11am. And no one saw a thing.

I had registered the bike with the police in a small town in Oregon so it was as good as gone. I thought, “why isn’t the registration on the internet?” That led to coding up the bicycle project, but after a ton of reflection and chatting with my wife (who is a photographer) I realized that the system would work a lot better for photo equipment.

It works by making it much more difficult for thieves to resell stolen items since information about a stolen camera or lens is freely available on major search engines. And the Chrome extension — Lenstag Rescue — that over 4,000 photographers have installed, checks images to see if they were taken with stolen cameras that’s helped us recover stolen gear. And as a user of Lenstag you get some level of copyright protection because you’ll get alerts when pictures taken with your verified equipment are found online (often not where you think they are).

As a registered user myself, I am surprised it is free. Will it be free forever or are you planning on charging for Lenstag at some stage in the future?

Lenstag as it stands right now will be free forever. There’s no point in charging since it would take away from the core mission of ending gear theft around the world. I’ve already made plans to ensure that Lenstag will be around as long as it takes and well after.

Can you share a success story of Lenstag helping to recover a photographers stolen camera gear?

One recent story is a photographer who had his house burglarized late last year and had all his gear stolen. Fast-forward several months and Lenstag lets him know that someone took a picture with his stolen camera and uploaded it to 500px. After a little detective work, he goes to the cops and then the cops go to person’s house who had the stolen camera and get it back as well as a bunch of other items that were stolen from the initial burglary. 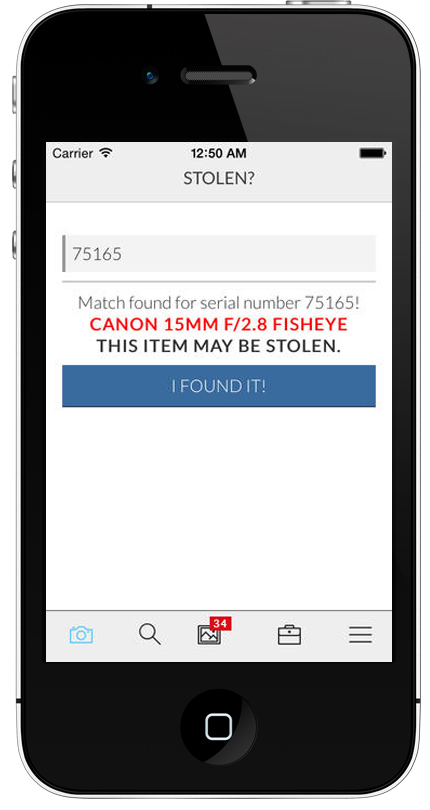 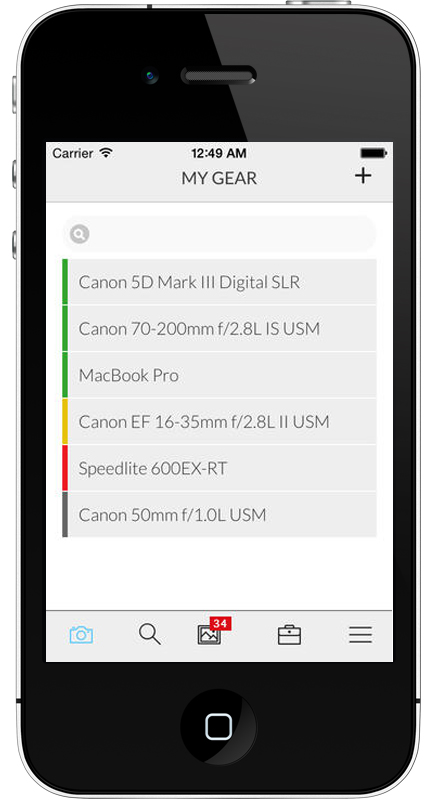 If I am buying second hand camera gear can I use Lenstag to check it is not stolen?

Yes and you don’t even have to use Lenstag. You can just do a Google search for “lenstag” and then the serial number. An example search might be “lenstag 75165”. If something shows up and the model matches what someone is trying to sell you, do not buy it. It’s crime in most jurisdictions to be in possession of stolen property — even if you don’t know it’s stolen — and there’s a chance you can go to jail for having the item. Best case scenario is that you forfeit the item back to its original owner. And while Lenstag finding the item in question isn’t necessary instantaneous, years down the road when you go to sell it, someone could leave us a tip and then you’ll lose it.

Nearly every day I see a new theft report come into my inbox about a photographer who has suffered at the hands of camera thieves and it has to stop. Whether it’s a client who lost photographs of their wedding day because a thief made off with the photographer’s camera after the ceremony, a guy getting drugged for his camera or even a crappy lens being surreptitiously switched out for an expensive one by a pickpocket, I’ve seen it all and, sadly, the worst of theft reports likely don’t make it to my desk because the photographer was killed.

When and how should a photographer register their gear?

You can register your gear on Lenstag.com or with the Lenstag mobile app on iOS and Android. The mobile apps are probably the easiest since the camera is built in, but you can add details on the web app if you have extra information along with the benefit of a keyboard.

Also, Lenstag does not generally accept shots of camera boxes since serial numbers on boxes often don’t exactly match the serial number on the items. Canon cameras and lenses suffer this greatly. Lastly, if you have something that doesn’t have a serial number but still want to record it for completeness or any other reason, just put “NONE” and we’ll mark it as verified. However, you’d be surprised at the number of items that do have serial numbers, so please triple-check or even email us at support@lenstag.com before you assume there isn’t one.

Can I register my gear with Lenstag if it is already stolen?

Yes, although some documentation (police report, etc.) is required. You can send it to support@lenstag.com.

Any exciting future developments in the works you can share?

We’ll be releasing the 2014 edition of our “most stolen” infographic in the next week or so. New for this year will be countries and cities where photographers most often get their gear stolen.

What are your thoughts?

Have you ever had to try and track down your stolen camera gear? Have you got a story about stolen camera gear you could share? I would like to hear your comments, you can leave them on this page, and please hit one of the social media share buttons below too, sharing is caring :=)