It was PACKED! It was a busy night in Sydney last night for the Vivid festival. I was walking down George Street to check out martin place, and a few other people were too…

I want to unwrap it and eat it! I would love to be in a planning session when the VIVID teams are putting together their ideas… I think it would be an interesting meeting to be a fly on the wall. Although this is less VIVID than most, I like the way it appears the […]

All Aboard I love the way the shadow of a passing ferry is used on the Opera House this year… very clever! If you want to join me on Thursday night for my Vivid Photowalk Workshop I only have 3 tickets left, I have capped the workshop at 6 people so you get plenty of […]

Vivid Sydney 2nd PhotoWORKSHOP Announced Hi Peeps, Ben here… WOW! The first workshop sold out in 3 days, so I am holding another one! Last year, you asked me about a workshop to help you get the most out of your camera in the challenging conditions of the Vivid Sydney festival. Come and spend 3 […] 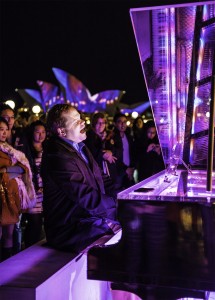 Hi Peeps, Ben here… Vivid Sydney 2014 is HERE! Last year, you asked me about a workshop to help you get the most out of your camera in the challenging conditions of the Vivid Sydney festival. Come and spend 3 hours with me and a small group of participants (I am capping this at just 6 […]