Posted at 11:00h in Tips & Tricks by justinerkelly 3 Comments

Know your Rights when taking Photos in Public

Filming in public places brings both logistical and legal problems. Generally speaking, you have a right to take photos of public places and the people within them- and you can publish them and even sell them. But (and isn’t there always a but) there are a lot grey areas to navigate including national security, privacy, copyright and possible defamations. 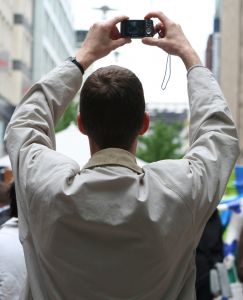 The general rule is that it is acceptable to photograph people as ‘incidentals’ in the street that you are trying to film or photograph (i.e. in a crowd). Ideally, you can’t distinguish their face and identify them, otherwise you should get the persons permission before the photograph can be used commercially

Publishing photos on your own blog should be okay (as long as you can say  ‘I was photographing the church and a person walked into shot’). For a commercial photographer that permission should be signing a Release Form.

Sometimes for street photography, photojournalis and travel photography, if it is clear that the member of the public is cooperating and posing for the photographer, that is enough to show permission. The problem would be if the subject later claimed that they thought it was for private use not commercial use.

If you try to sell the image you may be asked for the chain of permissions (the Release Form) because the publication is nervous about the people later claiming defamation or payment because they didn’t understand how the image would be used.

Defamation happens when the image harms a person’s reputation by spreading false or humiliating material about them. One example is in 2012 when an Australian man won a landmark defamation case against Google after images of him were published alongside a well-known gangland figure. He claimed it hurt his reputation and he lost business.

Shooting people from balconies or hidden spots (like Google did) or with telephoto lenses like the paparazzi is also considered unethical and an invasion of privacy. You will lose respect in the photography community and your photos are defamation risks. You might also get reported to the police on the suspicious of salacious activity for any kind of hidden camera nonsense.

A photograph that caused an international stir recently was taken with a smartphone by Vogue America’s style editor Elisabeth Von during fashion week. She snapped a shot of a homeless person reading Vogue as she got out of a taxi and uploaded it to her social media with the caption: “Paris is full of surprises… and @voguemagazine readers even in unexpected corners!” The problem was not the subject of a homeless women reading Vogue but that Von Thorn clearly took it without the women’s permission from an obscured spot and uploaded it without the women’s knowledge. This was potentionally both an invasion of privacy and defamation.

When travelling, especially outside the Western world where they are less defamation laws, it is usually okay to feature people you meet on the street as the centre of your photo as long as they are clearly cooperating with the photographer to get the shot. You may not be able to even explain what a release form is, so don’t bother.

However, even though you could use photos taken with a telephoto lens or hidden shots without being sued, if it looks like the person has been singled out and secretly shot most professional and established photogalleries, magazine and distributors won’t touch it on moral grounds. (The exceptionist to this is if you are shooting them at some kind of festival or cermony where many people are watching and filming. This are great opportunities for candid shots of people in crowds). 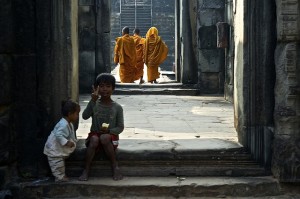 Children at a Temple

In the West shots of kids posing will need parental permission but in the Third World it seems to be the norm with all those cute shots we see on travel sites.

The best travel photos of people are taken with small lenses and at close range to the willing subject with spontaneity and a shared joy.

This technique can get you a nice sharp image of the subject and a lovely blurred background too. The shot we have featured here is a wonderful composition but because the photographer used a long lens and stood back, we missed a sharp focus on the kids and instead shadow falls on their faces.  The background is too bright and overpowers the subjects. Another tip is that big lenses and a lot of equipment tend to make people nervous about being photographed so keep your kit as small and simple as you can.

Shooting on streets and in public with a single hand held camera is usually okay as long as you don’t obstruct the area. If you are carrying a tripod and equipment or have a crew of more than about 3 people, you will probably need to get the town councils approval. Apply a number of weeks ahead of time.

It’s also a good idea to go into local business and explain what you are doing and for how long, to keep people onside. For publishing and privacy purposes remember to focus on a crowd, objects or your model, not an individual unless you have their written permission.

In case there is someone you come across that you want to pose in shot, carry a business card and some release forms to ensure you have permission and can show your work publically. Some happy and generous people won’t care but if you want to sell the photograph you will need this chain of permission to show to the photogallery, publications or distributor. 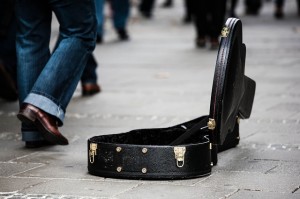 A busker in the street

Do you really need to worry about capturing people’s faces at all? The best street photographers think outside of the box looking for ways to artistically express the emotion of being there without interrupting or invading peoples space. Silhouettes and backs of head, hand gestures, objects and lines or as in this photograph a pedistrians feet and an open guitar case can tell the story of a street baser.

The concept of permission is the same as any other public space but what will stop you getting those artistic shots at train stations and airports is security. Yes, they are worried you are photographing and uploading to evil sources with evil plans. Better to be safe than sorry.

These days you usually can’t film in many parts of the train stations, airports and public transportation hubs by law without permission from the authority (which is often doable but a long application process and sometimes hourly fee). However, all the time we see images and video taken with smart phones and uploaded to social media, which makes the whole security thing seem pointless. If you go in with a small camera and lens already set, if you don’t obstruct anyone or don’t look suspicious you can probably get some shots but always cooperate with security guards and obey signs or you may be arrested. Alternatively, if you speak to authorities they may give you permission to shoot during off-peak times. This application process is likely to take some time with background checks and fees so plan ahead. 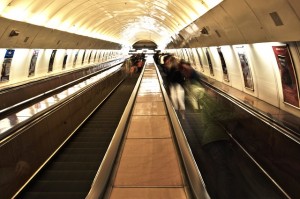 Escalator in a subway station

You can also use artistic ideas to capture the essence but not the faces of commuters. A shot like this probably used a low shutter speed and tripod, so the photographer almost certainly got permission.

Although most military sites are officially and completely off limits to photographers, you have the right as a tourists shoot around many government buildings in most cities. You don’t have permission to photograph in areas where they put signs up or where you need to pass a security check to enter. Politicians are high-risk targets so this is understandable.

Sometimes near Government buildings and outside tourist areas photographers come under suspicion from zealous security guards. You may be asked to move on just on their hunch. It’s an argument you are unlikely to win quickly so I would go away and come back another time.

Approach the security guard upfront and ask if it’s alright to photograph here, even when you know probably it is legally permitted. Hopefully they’ll leave you alone because you laid your cards on the table and let them know what you are shooting and why.

These are often where professional travel photographers get their best shots as people are generally in the mood to be photographed, dressed in amazing traditional outfit and may even jump into your pictures.

Whether that be a religious ceremony in Mumbai or a music festival in Melbourne festivals are fun for photographers. Because of the nature of such events, people have inadvertently given permission to be photographed by participating in a parade or show or jumping on stage. People are filming and uploaded all around you.

Bystanders are often enthusiastic and open to being photographed too. But be a little careful here- maybe they have gotten swept up in the moment and forget that they weren’t supposed to be there (with that person) so I would definitely not publish photographs of the general public kissing or doing anything embarrassing without release forms at least in the Western world.

But if they are in an incidental crowd in the background, they would have a hard case to argue against you. For the most part,  relax about incidentals (just don’t publish them later if you are worried when you review them) and you can usually shoot at will at all kinds of festivals around the world. 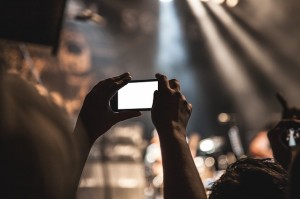 Bring lots of memory cards and batteries, and just go mad. Set the camera on the fastest shutter speed that will work with the light to get the crisp movement. In low light you might need to set a high ISO to do this but the grainy look can be artistic.  Move yourself physically into the best available light to help this.

I would love to hear from you if you have ever had any issues taking photos or video in a public place, or, if you have used a photo of someone in public without a release form and they contacted you for payment. Leave your comments and questions below.

Filming in public places, logistical and legal problems street photograhy, What is considered an Invasion of Privacy, What is Defamation
Share
Print page
0 Likes