Let’s take a look at the rule of thirds and how you can use it to improve your photography.

You’ve probably heard of the rule of thirds, it’s probably one rule in photography that’s a good rule to abide by in a lot of cases. And there are times though when you may break the rule. But funnily enough, when I was going through all my images, trying to find some examples, I noticed that 98% of my images actually use the rule of thirds to a T! I’m going to show you how the rule works with some of my images in a second… 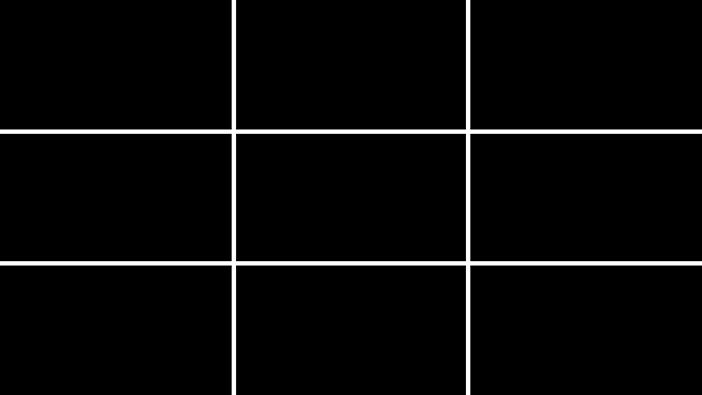 Taking a look at the black image with the white lines on it. You’ll see there’s two horizontal lines, and two vertical lines.

These lines are what’s called equidistant from the top to the bottom, and from the left to the right of the image. So they’re three equal spaces in between the top, the first line, the second line, and the bottom. And then the same with the vertical lines. So once again, equidistant spaces. And we’ve got nine areas of equal size. Essentially this is the Rule of Thirds!

Why is the Rule of Thirds Important?

The reason why the rule of thirds is important is that for good composition in photography, we want to place our subject, or the subject of importance in our image, on one of the four intersections. Or at least on one of the lines. 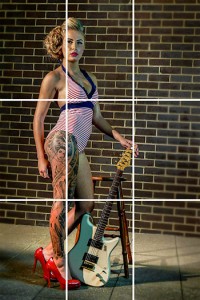 Rule of Thirds with a Model

How about the Rule of Thirds with a Lighthouse 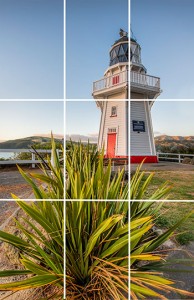 The Rule of Thirds and the Horizon

Now, this is an interesting one. This is a picture of Sydney’s harbour at sunrise. There’s a couple of things at play here.

One of the common mistakes people make in photo composition with landscape photography is to put the horizon right across the middle of the image, and it rarely looks good (it can work if you’re capturing reflections). 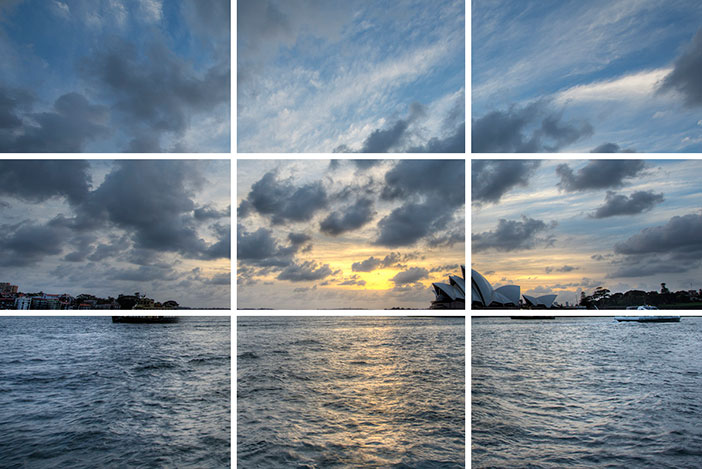 Now, if my sky wasn’t interesting in this image, I probably would have placed the horizon on the top horizontal line, and I would’ve had a lot more water in the foreground. So just depends on what’s going on as to what you want to include in your shot. But it certainly gives you a good idea of where to point your camera.

Strong Foregrounds and The Rule of Thirds 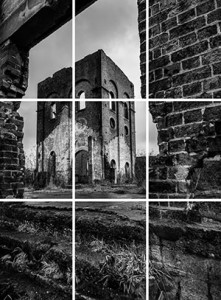 This image is another good lesson, because this one’s got a very strong foreground. As you can see, it’s got this brick wall with an opening, which frames a building, an old building.

What I’ve done here, is the old building is on one of the lines, and on an intersection from the rule of thirds. So you can see, even with a really strong foreground, you still need to be thinking about the rule of thirds. And because of the fact the building is on an intersection, it doesn’t get overpowered by the strong foreground. So you’ve still got your image subject shining though.

A Symmetrical image and the Rule of Thirds 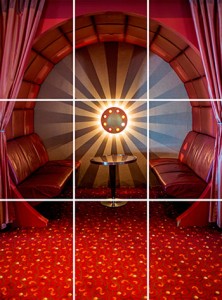 Now this one here’s an interesting one. I picked this one because it doesn’t follow the rule of thirds per se. In fact, this one’s more of a symmetrical shoot. This is a martini bar booth on a cruise boat. As you can see, there is nothing at all on the intersections in this image here.

And the reason this image works is because it’s symmetrical. So sometimes you’re not going to use the rule of thirds. You can see though I haven’t put the booth in the middle of the photo, it’s still using a little bit of the rule of thirds, the seats are close to the bottom horizontal line.

I wanted to show you this one as it’s not really following the rule, there is nothing on the intersections. So that’s an example of an image that doesn’t follow the rule of thirds, but it still works. So you don’t have to necessarily follow the rules.

People and The Rule of Thirds 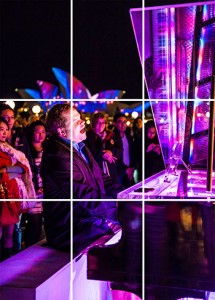 This is a piano that was at the Sydney Vivid Festival, it’s a light festival in Sydney they have every year. And with this one here, it was really about waiting for the right moment. But as you can see, if you look at the vertical lines, the Sydney Opera House – the guy who’s singing is on the left vertical line.

You can see right near this intersection here is the guys head and the Sydney Opera House. So really, that’s the area of the image that your eye would be drawn to. I think it works really, really well.

I would have probably composed it a little bit lower, to put his head or put the intersection down a bit lower on his head. But, in this instance, once again – stretching the rule just a little bit. I wanted to get the top of the piano, which was like a perspex top on top of this piano.

I wanted to create a leading line in from the corner. And then the reflection of the keyboard with his fingers. So sometimes you’ve got to stretch or move the rule around a little bit to suit what it is you’re trying to achieve.

Small Subjects and The Rule of Thirds

Here are some swans on Lake Burley Griffin in Canberra. This is almost a panoramic image. Same thing applies, the swans are on the intersection. Even though the swans are a small part of this image, your eyes are drawn straight to them, it works.

Waterfalls and The Rule of Thirds 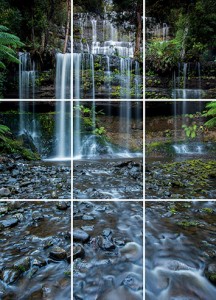 In this image the rock ledge is on the top horizontal line and that does make it strong. And because it’s a waterfall, there’s a lot going on. But I have placed the strongest part of the falls on the top left intersection, and that makes it really stand out. That the placement just works nicely. And once again, the rule of thirds at work.

Hopefully that has given you a solid understanding of how the rule of thirds works, and how you can use this in your photography. I’m sure it will make a difference to what you do, it’ll make your composition a lot more appealing when you take photos. If you want more tips I’ve got a free e-book called 10 Tips to Better Photos. CLICK HERE to download a copy for yourself!

The Rule of Thirds Video

Here’s a video I created where I talk you through each image and how the rule of thirds applies.